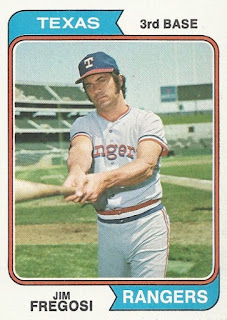 Back to the west coast as Jim Fregosi poses in Oakland. Jim was about to kick into the second part of his playing career - that of an infielder reserve - by the end of the '73 season. In July of that year he was sold to Texas by the Mets. Back in the AL his numbers picked up substantially, but nowhere near where they were in his prime. He will be always remembered for his earlier transaction as the guy traded for Nolan Ryan. An interesting sidebar to that deal is that Ryan wasn't even the pitcher California initially wanted, but I'll get to that on another post. Here, at least, we get a red, white, and blue color scheme for the Fourth.

Jim Fregosi was born and grew up in San Francisco where he excelled in four sports in high school. He was signed by the Red Sox in '60 and got off to a pretty good start in D ball and then in '61 was grabbed by the LA Angels in the expansion draft. For LA he would be their starting Triple A shortstop the next season-and-a-half. He hit OK, putting up a .283 average in '62, but fielding was a little problematic. Jim had a very strong arm and put up a decent amount of throwing errors. He played a bit up top late in '61 and then came up for good the second half of '62 and was given the starting job in '63. Through '70 he would be the league's best-hitting shortstop and his defense improved significantly so that by the middle of the '60's he and Bobby Knoop at second were one of the AL's best middle infield combinations. During that time Jim received MVP votes every year, made six All-Star teams, and won a Gold Glove. He was the team's first true star and its most consistent hitter.

'71 was a perfect storm type of year for California. Fregosi, just off the best season in his career, got a tumor on his foot, missed a bunch of time, and was so constricted in his mobility that he put in some time at first base. Then came The Trade. After the crash and burn the Angels wanted to improve their pitching and revamp their outfield. The Mets desperately needed a third baseman and while Jim was damaged goods, they decided to take a shot. Pitcher number one wasn't available but Ryan wanted out of NY (his wife was terrified of the place), he had finished the '71 season 2-10, and had put up nearly as many walks as strikeouts to date. So Jim was traded for Ryan, a couple minor leaguers, and Leroy Stanton, a pretty hot outfield prospect. When the year opened he was the third base starter but his unfamiliarity with the position, being in a new league, and permanent damage from his tumor combined to produce a season as bad as '71's.  Beginning in '74 Jim would play primarily first and DH a bit, both in supporting roles. In '77 he went to the Pirates for Ed Kirkpatrick and had a good year as a pinch hitter. He was then released in the summer of '78 so that he could pursue his next career. Lifetime Jim hit .265 with 151 homers and 756 RBI's. His OBA was .338 which, while not over-the-top great, was way higher than average at the time for shortstops. And defensively he is in the top 75 all-time for putouts, assists, and double plays at shortstop. 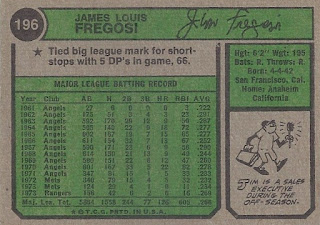 Jim gets one star bullet and it's pretty good, He also hit for the cycle twice during his career. I guess he dropped that salesman gig pretty quickly. Jim gets a pretty funny mention in the "Seasons in Hell" book. He was the first guy to field a ball in the game in which Jim Merritt threw a greaseball and on a pretty routine play his throw to first sailed way over Jim Spencer's head. Fregosi was laughing before the ball hit the ground.

We are still on an all-AL swing: