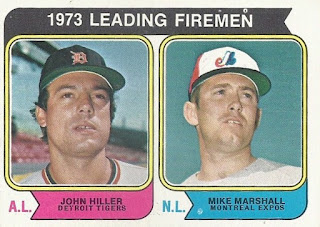 This card represents another award/stat that tends to have random leaders. In '73 it was John Hiller in the same stadium as on his player card which I now believe is Baltimore, judging by the red fence between the dugout and the stands with that weird overhang is that looks like the Wright Brothers plane. John came back from his heart attack to lead the AL. Mike Marshall's photo is another mystery as it is an airbrush job from what I believe is his days as a Tiger, making it at least six years old. I remain amazed that Topps couldn't come up with a more recent photo, especially since his regular card was current.Both John and Mike have their game faces going and they both led their leagues by pretty fat margins. And like the guys on the strikeouts card, they both pitched for the same team at some point in their careers. 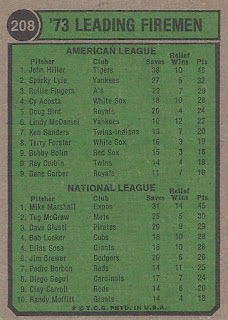 John Hiller's AL save number was a record. There are a lot of two-fers on this list: Yankees, White Sox, Royals, and Twins. Six of 11 relievers had been or would be Fireman of the Year. These guys averaged 117 innings pitched in '73. That's not happening any more, certainly not for closers. The doubles mentioned above averaged 250 innings between them. That's pretty impressive given the number of complete games pitched in '73. In the AL there were 614 complete games thrown that season; in 2010 there were 93. My, the game has changed. This list also leans toward the old guys; one pitcher here, Bobby Bolin, would never throw another inning. Only Cy Acosta, Doug Bird - a rookie in '73, Terry Forster, and Roy Corbin began their careers in the '70's.

The NL list, like the AL, tends to be skewed toward the older guys. Elias Sosa was a rookie and only he, Pedro Borbon, and Randy Moffitt began their careers in the '70's. The Reds back then tended toward bullpen by committee and are not surprisingly represented by two pitchers. So are the Giants, who split closer time for years. Diego Segui's saves total was a team record for the Cards. So was Mike Marshall's for the Expos, but at least it's a good total. In '73 saves were still not considered that impressive a stat; the team leaders list doesn't even include it. These relievers averaged 109 innings in '73, which we would expect to be lower than the AL average. In '73 NL starters threw 447 complete games (a big discount to the AL guys); in 2010 they threw only 72. Here's something odd: while researching this post I used the baseball-reference 2010 NL summary page and the league record totals were 1,288-1,304. How does that happen?
Posted by wobs at 11:59 PM