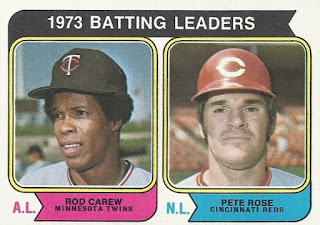 After some major scanning issues - I had to figure out how to do on Windows what was a piece of cake on Apple - I am back with some new posts. I also was noodling about how to make these cards interesting since they can be yawners on their own. Obviously all that would be done on the back of the card since we just get the two (or more) head shots on the front. Nothing too interesting here. Rod Carew looks a little baffled in Oakland and Pete Rose is in what looks like a mug shot - pretty appropriate - in Candlestick during his MVP year. Both these leaders should be HOF guys. But... 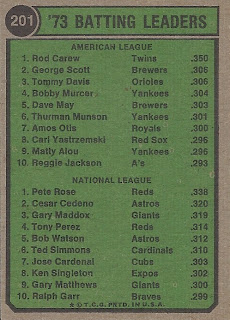 All the themes I thought of for these cards would make the posts tediously long and since I tend to go in that direction anyway, I'm just going to opt for some light commentary just on the relevant info here.

In the AL, our boy Rod really dusts his competition, doesn't he? It was the widest winning margin since Ted Williams hit .406 in '41 beating Cecil Travis at .359. Carew would make a habit of fat victory margins though, as he would win his next three titles (he won six overall) by an average of 43 points. Tommy Davis is the only DH in the top ten and he was a very interesting story that year. Thurman Munson is the only catcher on the list; everyone else was normally a first baseman or outfielder except Carew who was heading in that direction. Three Yankees make the list which invites a comment on how spotty their pitching must have been. There is a career season represented by Dave May and Reggie Jackson makes the top ten in what was his MVP year.

Speaking of MVP's, Rose leads the NL in his award-winning season. The NL West guys hog the top five spots in a list loaded with relative newcomers: seven guys had their first meaningful season in the '70's. Again there is a stray catcher in Ted Simmons while everyone else is either an outfielder or first baseman. The top ten also gives us the '73 ROY in Gary Matthews. In the first year of the DH the averages of the top guys in the NL average out to a bit higher than the AL guys. The real effect of the DH will be seen on another card.

A few posts ago, Dave Cash's card represented a milestone in that it was the 30% mark of the set. To honor that passing, I will do a statistical review of the set.

Post-Season: Every year is now represented from '57 to '89 with the exception of '60. Again, '74 has the largest representative amount of participants with 31.

Milestones: There have been 24 rookie cards and 12 final cards among the players which means the first to last card ratio remains at two to one. There have been 21 members of the Hall of Fame and 21 cards of players who switched teams following the '73 season, including the official Traded cards. Sadly there are now 19 player cards of guys who have passed on, a significant jump since the last counting.

Random: There have been 55 action cards thus far, which means the pace of those occurrences has slowed down a bit. There have been 63 home uniforms and 116 away ones. There have been 16 guys with parenthetical names, a pretty good pop, and four players who officially served in Vietnam. Cards I have deemed ugly were stuck on five, which should be a good thing.
Posted by wobs at 11:36 PM