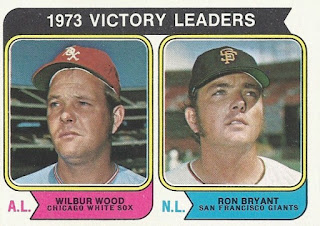 On to the pitchers. Just like on the RBI card the AL guy is in Oakland and the NL guy in San Francisco. When this photo was taken Wilbur Wood was starting just about every other game for the Sox but he still looks like he's ready to go. Ron Bryant is staring off pensively, hopefully not seeing what's down the road in his career. If he turned around he'd see some ET-type guys behind him. Both these pitchers rode fast starts to capture the league titles, but they really couldn't be more different. Wilbur had a pretty good streak of finishing close to the top of the pitching leaders. Ron had this season and that was pretty much it. And neither of these guys won the Cy. We'll see the winners on the next card. 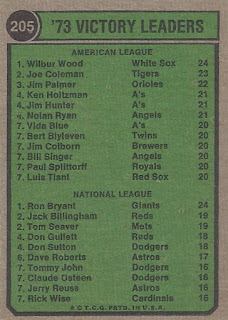 Now this card back invites tons of commentary. First of all, look at all the 20 game winners in the AL. There are 12 of them which has to be a record. In '72 there were six guys who won 20. Why the big uptick? Two letters: DH. The imposition of the new DH rule allowed managers to keep their starters in longer since none needed to be pulled for a pinch hitter. In fact these 12 guys averaged 300 innings pitched in '73. In 2010 the top ten winners in the AL averaged 225 innings. The old guys say the kids today are coddled. Are they? Let's see how these 300-inning guys fared. Jim Palmer, Nolan Ryan, Bert Blyleven, and Luis Tiant pitched forever. Wood would have also probably, had Ron LeFlore not shattered his kneecap. Vida Blue and Paul Splittorf had reasonably long careers. Bill Singer tended to get hurt, but it doesn't seem to be from overuse. The rest of the guys - Joe Coleman, Ken Holtzman, Catfish Hunter, and Jim Colborn - all ran out of gas in their early thirties. The first three had long streaks of lots of innings but Catfish could have slowed down from early onset of ALS and Holtzman really only went south when he WASN'T used. That leaves Colborn. So at least from this group, lots of innings pitched seemed to not unduly influence their careers in a negative way. Only three of these guys - Blyleven, Colborn, and Splittorf - would only win 20 once, so this group was used to being in the limelight victory-wise.

Contrary to the AL, the NL only had one 20-game winner. The NL winner leaders averaged 258 innings pitched, a pretty steep discount to the AL guys. Had they averaged as many innings, it is conceivable that everyone down to Dave Roberts would have won 20. All these pitchers had been on the leader list before or would be again. Like in the AL, they tended to be innings hogs and none of them seemed to suffer from overuse. Don Gullett was a great pitcher but he was always hurt and would be done by age 27 so he never got a chance to be overused. Claude Osteen was on his way out but he'd had a long career and Tommy John was about to be headed to the experimental surgery that would probably double his time pitching. Bryant's career got derailed from an injury off the field. So again there's no definitive evidence that big innings meant short careers.
Posted by wobs at 11:59 PM